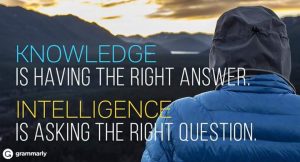 Step 3 – learn how to learn and teach things better.

Repeat for the rest of your career. The longer I taught the more I realised how much I had to learn about how to share knowledge and skills (yes, Socratic influence 🙂 ).

I taught in three UK universities, two UK Further Education Colleges and before that two senior schools in France (as a language tutor). Realising that I had some aptitude for survival in the classroom the French teachers gave me ‘the unteachables’ so that they could get some work done with the other students. I learned to engage my students with humour and respect, to try to see things from their perspective but not to try to be their friend – they didn’t need a friend, they needed a tutor. My French students, who bounced in as a pack grinning, “Salut Madame, nous sommes les nuls”, declaring themselves to be unteachable, taught me to have a plan but one flexible enough for a group of individuals (all classes are made up of individuals). They also taught me to keep an eye on doors (to which they had keys…) and windows (through which they had been known to throw furniture when bored, a humiliation they kindly didn’t subject me to).

My point is that all teaching experience is relevant. I learned from teaching simple skills to 3 year olds as an au pair, I learned a great deal from working with young people with learning disabilities and autism (including one memorable young woman who was able to understood everything and could speak but chose not to – ever – to anyone). When you teach you have to be able to teach those who react (positively, negatively or with dramatic indifference to all things study related), those who won’t even engage with you, and those who are so keen that they have spent longer preparing the class than you did.

Teaching isn’t just about sharing knowledge – it’s about reaching out to people, engaging with them. A good seminar isn’t just about the tutor – it’s about tutor and students engaging with each other. If you have a good seminar as a tutor you can’t take all the credit – your students must have contributed something. Equally if you feel that a seminar doesn’t go well you can’t take all the blame, even though you take overall responsibility for how the course runs.

Ask yourself why a seminar or tutorial didn’t work, ask your students and see how to get things to work better next time. I actually stopped mid seminar once or twice, told my students I didn’t think it was working and gave them 2 or 3 options as to how we could proceed. When they had recovered from the shock and then the panic (they would have to think, to be part of the decision), things worked much better. Generally I found that when things didn’t seem to be going as well as I’d hoped it was down to something very basic: the students hadn’t read the text so had no idea what I was going on about; there had been a huge party the night before so they didn’t know what planet they were on; they were working late the night before so were simply too tired to focus.

Sometimes we didn’t need to stop a session for long. I just needed to get them to relax, to breathe, to wake their brains up a bit so I’d stop (or start saying “blah blah blah blah” until someone started to smile) and ask then what they hated most about the text or the course – or student life in general.

My students were excellent film critics and very good at telling me which films I would like and which were too scary for me 🙂 . Teaching tip: try to get students to tap into their television and film critical skills when talking about novels and plays  – they often have far better critical skills than they realise. If you ask them which actor they would get to play which part and how they would direct certain scenes it’s surprising what they can do. If they won’t play ball then start them off by suggesting an improbable actor and ridiculous direction and they’ll probably take over when they’ve finished laughing.

Talk to a dog 🙂 , don’t take yourself too seriously, breathe and get fresh air!!! Oh… and good coffee – but then you knew that 🙂 .